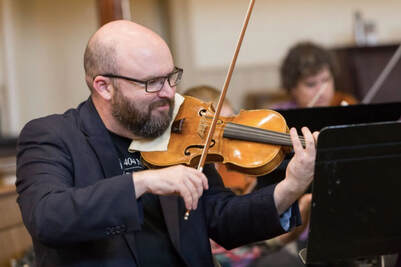 Mark Fewer - Sweetwater Music Festival
​Described as “genre-bending” by the National Post, and “intrepid” by the Globe and Mail, Mark Fewer has performed around the world to critical acclaim in virtually every role asked of a violinist – and then some.  His regular musical diet includes performances from the early baroque to the avant-garde, with recent performances as soloist with groups as wide-ranging as the Melbourne Symphony (Australia), the Fodens-Richardson Brass Band (UK), the Zapp Quartet (Amsterdam), and the McGill Percussion Ensemble (Canada).

As a chamber musician, Mr. Fewer is a regular member of the Duke Piano Trio and the Smithsonian Chamber Players.  He has also recently performed in chamber setting with artists such as Leon Fleisher, Edgar Meyer, Gilbert Kalish, James Campbell, Matt Haimovitz and Elizabeth Wallfisch.In 2011 he replaced both violinists of the St. Lawrence String Quartet and was subsequently awarded the “5th Man Paternity Prize”.

As a jazz violinist he has had the honour of sharing the stage with Dave Young, Brad Turner, Jodi Proznick, Terri Clark, Gene di Novi, Phil Dwyer, VanDjango and others.

​Mr. Fewer was the artistic director of the Scotia Festival of Music from 2004-2009, and is the founding director of the SweetWater Music Festival, now famous for it’s programmatic creativity and performance excellence.  He was concertmaster of the Vancouver Symphony from 2004-2008, and has been on faculty of the Schulich School of Music, McGill University, since 2007. Mr. Fewer can be heard regularly on NPR, CBC Radio Two, BBC 3, RTVE, and ABC, and is the feature interview for an episode of the Biography Channel’s People Uncut.