History of Music and Opera Appreciation 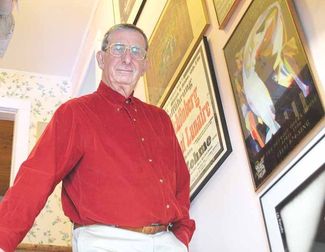 Music and Opera Appreciation has entertained audiences for over 20 years.  From its inception in May of 1994, Music and Opera Appreciation has produced annual Winter and Fall Series of educational afternoon programs, as well as several concerts featuring talented Canadian artists with international careers.  Our mandate to develop programming to the very highest standards, to educate, excite and entertain anyone interested in the musical arts remains central and the measure of success.

Music and Opera Appreciation (MOA) began in 1994 as a seniors outreach program in St. Marys Ontario with six people attending.  After a newspaper article in the Journal Argus featured the new program under the leadership of John Leberg, C.M., the audience grew exponentially.  In November of 2003 Music and Opera Appreciation Inc. became a not-for-profit incorporated entity with a charitable business number from the Canada Revenue Agency (CRA).  With generous support from patrons and continued sponsorship from Steve Cousins, general manager of Norampac of St. Marys, equipment for the presentation of programs was purchased and the Board of Directors developed a fiscally responsible, publicly accountable system of practice that accounts for the efficient status MOA enjoys to this day.

John Leberg, the founder, artistic leader and driving force behind Music and Opera  Appreciation, presented his final program on November 18, 2014 and urged MOA to continue to develop  programming that would excite, educate and entertain.  When people are excited, art is relevant and education helps us understand the artistic ideas and technical skills used to communicate that excitement.  Entertainment helps us deal with life on many levels. John’s vision, manifest through Music and Opera Appreciation, is that culture and its creations are essential to people and must be sustained in our communities.  Traditionally subscribers come from Brantford, Kitchener, Waterloo, Stratford, St. Marys, Ingersoll and surrounding areas.

Under John’s aegis, a critical mass of loyal subscribers have expanded their intellectual world and understanding of the musical arts through Music and Opera Appreciation programming.  John Leberg volunteered his time, talent and considerable professional experience in the music and opera profession to develop a music-listening and opera film program that evolved into a program containing six main components:


In the fall of 2006 John produced a very successful recital with internationally acclaimed baritone Russell Braun singing Schubert’s Die Wintereisse in the original German and the late Richard Monette, then Artistic Director of the Stratford Festival, reading the poetry in English translation.  The English poetry read by a legendary actor represented innovative programing and set the standard for concert programs to come.  A very well attended, all-Beethoven recital with Canadian pianist Anton Kuerti at the Studio Theatre followed in the fall of 2008.  The 2009 concert written and produced by John Leberg traced the fascinating story of Robert and Clara Schumann and Johannes Brahms through their music and personal correspondence.  The performance of Susan Platts (for John, the new Maureen Forrester), accompanied by Vancouver pianist Rena Sharon and acclaimed Canadian actor Seana McKenna as narrator, presented the music, the hopes and dreams and vulnerability of these iconic composers.  The latest concert in October of 2014 saw Canadian superstar countertenor Daniel Taylor, internationally renowned soprano Suzie LaBlanc, Musicians of the Theatre of Early Music, and Legacy Award winner Martha Henry as narrator, presenting music from Handel and Monteverdi to celebrate Music and Opera Appreciation’s Twentieth Anniversary.

Since John’s retirement, Music and Opera Appreciation programs have continued with the broad support of our community and the generosity of exceptional local talent in the Stratford area.  In November 2013, as John’s final year was about to begin, a Strategic Planning Group was formed to chart the path forward beyond 2014.  The group conducted a classical SWOT Analysis, identifying strengths, weaknesses, opportunities, and threats in MOA’s future operation.  It put forward a wide range of recommendations, and MOA established an Implementation Committee to carry them forward.

The implementation committee recognized that it would take time to select a new Artistic Director, and that the committee would therefore have to plan and oversee the programs covering a year-long transition period (the Winter and Fall Series of 2015).  Those twelve programs adopted the appropriate themes of ‘A New Beginning’ and ‘A New Generation’.  Exceptional presenters volunteered their time and talents to deliver the twelve programs.

Meanwhile, a new MOA website was created, along with an updated version of the logo and a new approach to the poster publicity designs.

Barbara has brought her limitless imagination and energy to the role, along with extensive experience in all aspects of music performance and production, and a large network of useful contacts in the worlds of music and opera in Stratford and beyond.  Audiences have responded well to her creative program planning and the combination of learning, entertainment, and inspiration that are central to MOA’s mission.  John Lederman has worked with Barbara to produce a Study Guide for each Series containing copious historical and musical background information.

Growing audiences have required the use of the larger Guthrie Room at The Quality Inn (formerly The Festival Inn).  Recent upgrades in the sound and video equipment have enhanced significantly the total experience that MOA’s loyal audiences have come to treasure.

Starting in 2016, MOA has actively supported the Stratford Summer Music Vocal Academy by including a live fundraising Concert as a part of each Fall Series . The performers have included Aggie Elliot, Ted Baerg, Gerald Issac, and (upcoming in 2019) Mark Fewer. The proceeds have been used to provide scholarships for Vocal Academy participants.  Since 2017, MOA has also provided billetting for all the participants.

Since 2017, MOA has supported the ‘Live from the Met’ opera programs presented by Queen of the Square Cinema at Stratford’s City Hall.


Contributors to the Transition

Many volunteers contributed to the successful transition of MOA in the months leading up to and following John Leberg’s retirement.