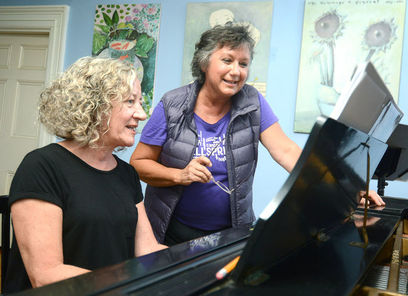 Marilyn Dallman and Aggie Elliot. Photo: Scott Wishart, Stratford Beacon Herald
Marilyn has been an Associate Conductor, Keyboard Player, Orchestra Supervisor, and Rehearsal Pianist for 34 seasons at the Stratford Festival. Recent shows include A Chorus Line and The Sound of Music. Marilyn is also Music Administrator for the Festival.

Elsewhere, Marilyn has worked for radio, television and various theatres across North America, including the Kennedy Centre in Washington, D.C., City Centre in New York City and the Old Vic in London, England.

Marilyn is a graduate of the Music Faculty at Western University.

She would like to add that she and Aggie did their first professional show together and she is thrilled to be working with Aggie again.
Powered by