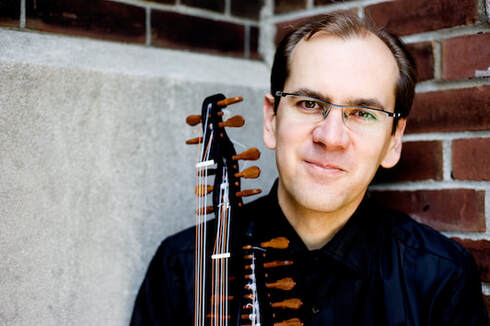 Lucas Harris
​Lucas is one of Canada’s busiest early music performers.  After sixteen years of experience performing as a lutenist with ensembles in Canada, the USA, and Europe, he made the decision to broaden his musical career by training as a choral conductor.  He has completed his M.M. in choral conducting at the University of Toronto with Dr. Hilary Apfelstadt, funded by a prestigious SSHRC research grant not often awarded to those in performance degrees at the Masters level.  Lucas has been a guest music director with the Pacific Baroque Orchestra, the Ohio State University Opera program, Vox Angelica, and Les Voix Baroques, and has created and directed a program of Austrian sacred music with the Toronto Consort.  He joined the Toronto Chamber Choir as its full-time artistic director starting with the 2014/15 season.

Lucas studied early music in Italy at the Civica scuola di musica di Milano (as a Marco Fodella Foundation scholar) and in Germany at the Hochschule für Künste Bremen.  Following his European studies, he was based in New York City for five years and has made Toronto his home since 2004.  He is on faculty at the Tafelmusik Baroque Summer Institute where he serves as lute instructor and coach for vocal and instrumental ensembles.  He has also served for twelve years on faculty of Oberlin Conservatory’s Baroque Performance Institute, where he has directed student performances of Baroque opera scenes.  He has also recently joined the faculty of the Vancouver Early Music Festival’s Baroque Vocal Programme, and has taught for the International Baroque Institute at Longy, the New York Continuo Collective, and Amherst Early Music.  He has been invited to give lectures and masterclasses at several universities, including the University of Toronto, University of Western Ontario, and the Glenn Gould Conservatory.

As a lutenist, Lucas has become one of North America’s busiest performers.  In addition to his regular engagements with Tafelmusik Baroque Orchestra, he has worked with the Toronto Consort, Circa 1500, Apollo’s Fire, Les Voix Baroques, the Smithsonian Chamber Players, The Harp Consort, the Boston Early Music Festival orchestra, Les Délices, and many other ensembles.  He is the founding member of the Toronto Continuo Collective, the Vesuvius Ensemble (dedicated to Southern Italian folk music), and the Lute Legends Ensemble (a multi-ethnic trio of lute, pipa, and oud).  Lucas has also played with several modern-instrument groups, including the Boston, St. Louis, and Montréal Symphony Orchestras, the Metropolitan Opera, the Orchestra of St. Luke’s, and Via Salzburg, with whom he was a concerto soloist.  Recordings include the solo CD Baroque Lute Recital as well as a collaboration with violinist Geneviève Gilardeau, The Bach/Weiss Sonata.
Powered by