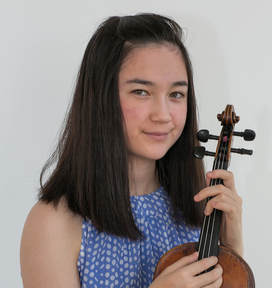 Ji Won Baxter
​Born in 2002, Ji Won began her violin studies when she was four years old. Since then, she has availed herself of many opportunities to display and improve her musical performance. She has been the recipient of several local Kiwanis Music Festival awards, after which she attended the Provincial competition and placed 2nd. She began studying the violin with Dini Westman of the Stratford Suzuki Academy; since 2016, Ji Won has been under the tutelage of Jerzy Kaplanek, an Associate Professor of Violin, Strings and Chamber Music at Wilfrid Laurier University and a member of the world-renowned Penderecki String Quartet.

Ji Won is currently in Grade 10 at Stratford Central Secondary School and is the Founder of Central Strings, a chamber ensemble for string students. She is also the associate concertmaster in the Kitchener Waterloo Youth Symphony Orchestra. She would like to commend all of her teachers who have imparted their wisdom, sought genuine expression in her music making, and to all of her friends and family who have encouraged her endlessly.
Powered by