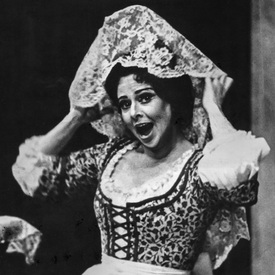 Gwenlynn Little in The Marriage of Figaro, production of New York City Opera, 1977
After graduation from the University of Toronto with ARCT diplomas as solo performer in both Piano and Voice, Gwenlynn Little went on to have a long and successful singing career.  As a Mozart specialist she was soloist with the Canadian Opera Company for 10 years, leading soprano in the Mozart operas at  the Avon Theatre at the Stratford Festival for 4 years, and for 10 years sang leading roles with the New York City Opera.  She was a frequent guest artist in major roles with opera houses in England, Scotland, Switzerland and Germany.

Ms Little performed in the first opera ever presented at the National Arts Centre in Ottawa (Mozart's The Marriage of Figaro).  Numerous performances with symphonies and choirs in concerts and oratorios took her all over North America, and she  has appeared in many recitals and concerts of chamber music.  Ms Little was nominated for a Genie award for her portrayal of Serpina in the CBCTV production of La Serva Padrona, and she debuted Sydney Hodkin's Chanson de Jadis at the  National Arts Centre.  When the Ottawa Chamber group L'Espace Musique held a tribute to Louis Applebaum, Ms Little was asked to sing his song cycle Folio of  Shakespearean Songs and coached them with the composer.

Ms Little is now in demand for master classes, workshops,lectures, and as a music  festival adjudicator.  She has many private students in both classical voice and music theatre.  Several of her students are already performing with opera companies in Europe.  Former students of hers have sung in London's West End and with  opera companies throughout Canada.  She currently presents workshops at the Stratford Festival, and teaches a number of the Festival artists privately.  From September of 2004, Ms. Little was a member of the teaching faculty of the University of Western Ontario, retiring in 2015.

In the Fall of 2006, 4 celli and Ms Little formed the chamber ensemble "Celli-bration", unique in that it embraces soprano and strings.  In 2009, Ms Little and Sir William Hughes launched their first CD, Classically Celtic (voice and flute), with a performance in Von Kuster Hall at the University of Western Ontario.

Ms Little was the recipient of 7 Canada Council Awards, and a winner of the Sir Tyrone Guthrie Award at the Stratford Festival.  She attended the Opera School of the Canadian Opera Company on full scholarship for 3 years.  She received  the silver medal for the highest marks for Grade 10 singing exam at the Royal Conservatory of Music.

Ms Little has spaces for serious Classical and Music Theatre singing students in her Woodstock studio and may be contacted at 519-421-2631.