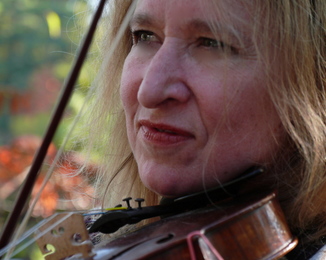 Anne Lederman
Anne has been called “a national treasure” (Gary Christl, Vancouver Folk Festival) and “one of the most talented musicians in the country”  (Derek Andrews, Luminato). Fiddler, singer, multi-instrumentalist and composer, Anne is a founding member of Muddy York, The Flying Bulgar Klezmer Band, LOKA, Eh?!, and Lederman/Bell, as well as leading her own groups, Come From Every Way and Fiddlesong. She was the resident fiddler on Road to Avonlea, composed for Veronica Tennant’s A Pair of Red Shorts, and has appeared several times on CBC’s The Vinyl Café, Morningside and Fresh Air.

​Featured on over 50 CDs with other artists, she has five under her own name: Not a Mark in This World, 7 Cats, Come From Every Way, Fiddlesong and now, Old Man’s Table: Tunes from Grandy Fagnan. She has performed at festivals, concerts, dances and schools throughout Canada, the U.S. and Europe and was the first Canadian to perform at the Viljandi Traditional Music Festival in Estonia. Known especially for her work with the Aboriginal fiddle traditions of her home province, Manitoba, her recordings have helped make this music known to the world. She also works extensively with theatre, composing and performing for The Blyth Festival, and most recently, for Rosemeath Theatre’s award-winning Spirit Horse. Her own play, Spirit of the Narrows, about discovering the world of First Nations and Métis fiddling, was presented  in the Fall of 2015 at the Pearl Company in Hamilton. Anne is the founding Artistic Director of Worlds of Music Toronto and World Fiddle Day Toronto and is on the Faculty of the Royal Conservatory of Music and of York University.
Powered by